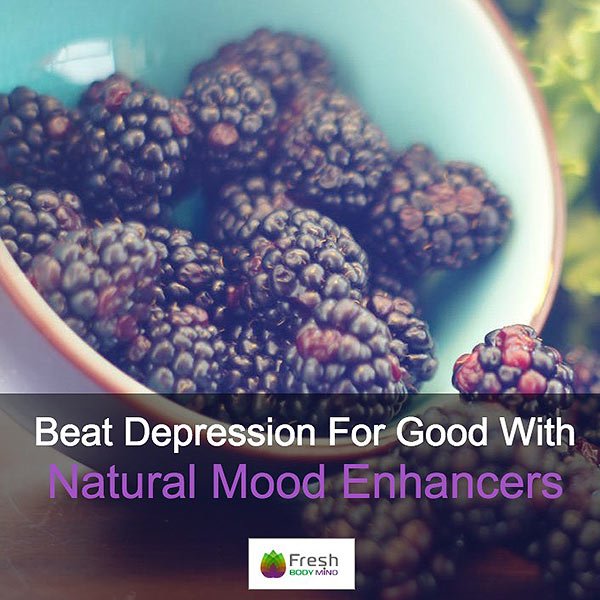 Did you know that 6.9 percent of adults in the US have suffered from depression in the past year? That’s 16 million people, many of whom have grappled with symptoms including fatigue, lack of appetite and intense sadness.

The reasons for this explosion in mental health problems are varied, but many doctors put it down to our increasingly stressful modern lifestyles, characterized by lack of sunlight, poor diets and non-stop jobs. No wonder then that a few simple changes to our lifestyles can help lift the cloud of depression for good.

Depression is often difficult to treat, in part because its symptoms and causes vary so dramatically. Yet many doctors still believe that the answer is only to be found in the pill bottle.

From 1999 to 2012 the percentage of Americans on antidepressants shot up from 6.8 percent to 13 percent in, with numbers still rising. But antidepressants simply don't work for everyone in every case. Not only that, but the pills also come loaded with additional side effects including weight gain, personality changes and nausea.

So what’s the solution? While medication may well work for some, for those interested in alternative or supplementary therapies, there are lots of options. From exercise to ashwagandha, here’s our roundup of four mood-boosting treatments for depression.

It turns out exercise isn’t just important for your physical health – it can boost your mental wellbeing too. By increasing circulation, physical exercise works to deliver more glucose, oxygen and nutrients to your brain, while also clearing out toxins and metabolic debris. Not only that, but getting your heart pumping releases endorphins into the body, leaving you with that familiar post-workout high.

For those suffering from depression, it seems that exercise really does help. A study conducted by the Cooper Research Institute in Dallas found that patients who did the equivalent of 35 minutes’ walking, six days per week, experienced a reduction in their level of depression by 47 percent.

It should come as no surprise that what we eat can affect how we feel, both physically and mentally. This is especially true if deficiencies in certain vitamins, minerals, amino and fatty acids are having a direct effect on our mental wellbeing. In this case, eating a balanced diet rich in fresh, nutritious food can do wonders for our mental health. Some well-known mood boosting food types include:

Magnesium is a real mood-booster, and legumes like lentils, peas and beans are packed with the stuff. By supporting the brain chemical serotonin, magnesium can boost your energy levels in a flash.

Berries like raspberries, blueberries and blackberries are brilliant brain food. Packed with antioxidants, these tasty fruits can ward off the free radicals that slow down mental function.

Seeds including hemp, flax, chia and pumpkin seeds are packed with tryptophan, an amino acid that enhances serotonin production and thus improves mood. So try sprinkling them over your oatmeal or blending them into smoothies to help beat the blues.

3. Add Ashwagandha to Your Diet

A herb native to India, Ashwagandha has been cherished for thousands of years for its restorative qualities. Often referred to as Indian Ginseng, this superfood is commonly used in Ayurvedic healing for treating both mental and physical ailments.

Thanks to its adaptogenic properties, ashwagandha can help modulate your body’s response to changing situations, such as toxins in the environment and the onset of anxiety or stress. When it comes to battling depression, this is really important. As one recent study showed, by massively decreasing cortisol levels, ashwagandha can better prepare the body to fight off depression.

Mindfulness is becoming increasingly recognized as a powerful natural treatment for depression. But what does mindfulness mean? Put simply, it involves paying full attention to the present moment. Through mindfulness, those suffering from depression are encouraged to replace any debilitating thoughts with an acute awareness of the world around them.

The technique may be simple, but the research speaks for itself. According to a 2016 study, patients who practised mindfulness were 31 percent less likely to experience a relapse of depression in the next 60 weeks than those on antidepressants. So whether you adopt a daily meditation ritual, or simply make a conscious effort to connect with your surroundings, mindfulness could well help beat depression for good.