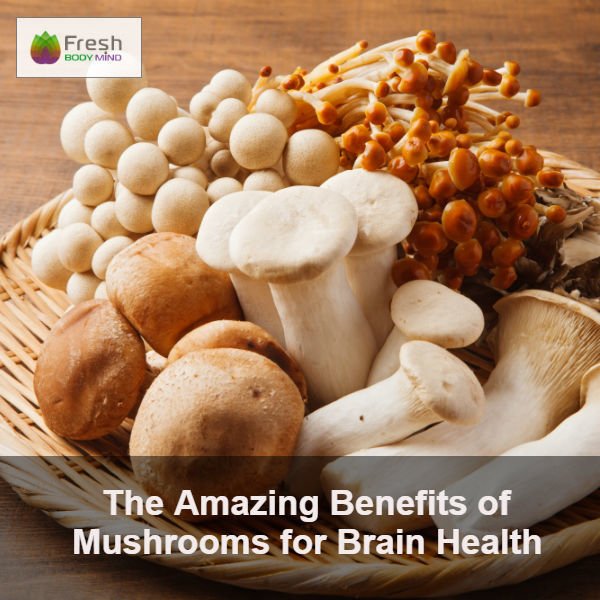 Often classified as a vegetable, mushrooms are actually a member of the fungi family. For centuries, traditional Chinese medicine has harnessed the amazing health boosting potential of many different varieties of mushroom. Now, exciting new research is beginning to reveal that the humble mushroom may possess another superpower – the ability to enhance brain health and safeguard against age-related cognitive decline.

Further research in this area is needed to reveal the full potential of the humble mushroom, but the untapped potential of this household staple is enormous.

How Can Mushrooms Benefit Brain Health?

A recent study, conducted between 2011 and 2017 in Singapore, revealed that senior citizens who ate more than two portions of mushrooms each week had their odds of suffering from mild cognitive impairment (MCI) halved.

Sufferers of MCI experience symptoms similar to Alzheimer’s disease or dementia, including poor memory, problems with language and lack of spatial awareness (though these are usually comparatively mild and do not prevent the person from living a full and fully functional life.)

The study, published by the Journal of Alzheimer’s Disease (JAD) in March 2019 saw participants consuming many common and widely available varieties of mushroom, including golden, shiitake, oyster and white button. The method of preparation was not deemed to affect outcome, with participants in the study consuming their mushrooms either dried, tinned or raw.

Researchers believe that a compound called ergothioneine, found in all varieties of mushroom, may be the element responsible for protecting and improving brain health and function, though further study is needed to confirm this. It’s likely that other compounds found in mushrooms may also be advantageous for decreasing the risk of cognitive decline.

Which Mushrooms Are Best for Brain Health?

Although all mushrooms are thought to possess a range of health benefits, the Lion’s mane variety (also known as yamabushitake, satyrs’ beard or the hedgehog mushroom) are often regarded as the most beneficial for maintaining and even improving brain health.

This ball shaped white fungus with cascading icicle like spines has been used for centuries in Chinese medicine to address a range of gastric conditions, including pancreatitis and stomach ulcers. Lion’s mane mushrooms also contain a compound that stimulate neurons in the brain, causing these to re-grow and trigger a process called ‘re-myelination’ that helps keep them healthy, along with maintaining their ability to effectively conduct electrical signals.

A clinical study, performed on Japanese men and women aged 60-80 who had been diagnosed with mild cognitive impairment, found that taking Lion’s mane mushroom supplements (in powder form) over a period of 16 weeks increased their scores on a cognitive function scale, compared with a placebo group. The study also showed that if mushroom consumption ceased, the advantage disappeared.

Do Mushrooms Have Any Other Benefits?

Mushrooms are a healthy food, packed with vitamins, minerals, protein and fibre.

For centuries, Chinese medicine has harnessed the healing and protective power of mushrooms, with different varieties used to treat different medical and mental conditions.

According to The Mushroom Council, mushrooms are also packed with:

D vitamins – which help to provide energy by breaking down proteins, fats and carbohydrates

Riboflavin – which helps with the production of hormones

Ergothioneine – a powerful antioxidant that helps protect the body’s cells

Beta glucans – which stimulates the immune system and contributes to resistance against allergies.

How Can I Add More Mushrooms to My Diet?

If you’re looking to boost overall brain health or address the effects of aging on cognitive function, adding more mushrooms to your diet is a great place to start.

Mushrooms are very versatile culinary ingredient and, whether cooked or raw, can easily be added to a variety of dishes including salads, soups, stir fries, pasta and noodles. They also make a tasty pizza topping, work well as a side dish with any meal and are a great snack food – try chopping your favourite mushrooms variety, sprinkling with olive oil and roasting for fifteen minutes for a tasty, crunchy treat.

The mushroom council of England has produced a fantastic fact sheet, detailing a number of ways to enjoy eating your favourite mushroom variety.