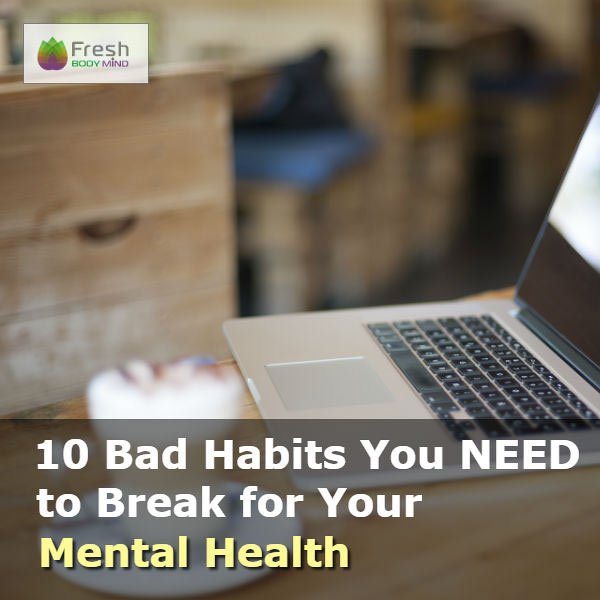 From eating too much sugar to obsessing over social media, when it comes to mental health, our daily habits can be our own worst enemy. Here’s our roundup of the top 10 you need to kick.

1. Drinking Too Much Coffee

Suffering from anxiety? You may want to put down that pick-me-up. Coffee is a central nervous system stimulant, meaning it can significantly contribute to anxiety and other stress-related problems. By stimulating the brain chemicals dopamine and acetylcholine, caffeine can offer a shot of productivity, motivation and brain power. For those with anxiety however, there’s a downside: caffeine can also block the calming neurotransmitter GABA, and lead to a higher tendency for panic attacks.

We’ve all been there: you’ve just come home from a long day at work and the last thing you want to do is slog it out at the gym. But while it may be the easiest option, skipping workouts can have a knock on effect on your mental health. Not only does exercise have a positive effect of your body, but it’s been shown to help your mind too.

When your work-life balance gets out of whack, your brain knows about it. According to a 2011 study of civil servants, working 11-plus hours a day more than doubled a person's odds of sliding into depression. So if you’re a workaholic, make sure you schedule in time for family, friends and self-care, just as you would an important meeting.

When you’re feeling blue, getting out of the house can be a challenge. But holing up inside can be harmful in a number of ways. Not only are you depriving yourself of mood-boosting Vitamin D, but you’re also missing out on all the soothing benefits of nature itself. In fact, studies have shown that people who regularly take time to stroll through parks are calmer and happier than those confined to busy city streets.

5. Beating Yourself Up Over a Mistake

How often have you told yourself off over a simple mistake? Cursing your own forgetfulness or clumsiness might seem harmless, but therapist Kathryn Gates suggest it might have a negative effect on your mental health: "Being in the unconscious habit of telling ourselves we are dumb, stupid or an idiot decreases a person's base feelings of competency and worth.” So the next time you make a mistake, try not to be so hard on yourself.

6. Eating Too Much Sugar

Comfort food may make us feel better when we’re down, but in the long term they can do more harm than good. In fact, researchers from University College London (UCL) have found a strong correlation between consuming higher levels of sugar and depression in men.

In the study, men whose daily sugar intake exceeded 67g a day, had a 23%-increased chance of suffering from conditions such as stress and depression after five years, compared with those who consumed less than 39.5g.

Social media offers the opportunity to connect with friends and family instantly, but it also has its drawbacks. According to San-Diego-based behavioral science PhD, Michael Mantell: “This instantaneous connection over-stimulates us, lessens our experiences and feelings, impacts attention, [and] demands immediate gratification and expectations [at] the press of a button.” So the next time you’re tempted to send a message on social media, why not pick up the phone instead?

Most people associate procrastination with laziness or boredom. But according to research from the Association for Psychological Science, it can also be caused by fear or anxiety. So rather than allowing these feelings to take over your life, take the leap and get stuck into that project you’ve been putting off.

People who smoke often say nicotine helps lessen stress, but research suggests that the opposite is true. A 2012 study found that heavy smoking is a risk factors for major depression. On top of that, smoking can complicate treatment for mental health issues by accelerating the metabolism of certain psychiatric medications, resulting in the need to up doses to get the same benefits.

How positive you are about the world is something of a self-fulfilling prophecy. Studies show that positive thinking can have a huge effect on your mental health, including increased confidence and energy. However, for pessimists it’s a different story. Those who consistently see the glass as half-empty appear to be more vulnerable to depression, anxiety, sleep disorders, and other health problems.

Whether you suffer from anxiety or depression, or simply just want a more positive approach to life, we could all benefit from paying more attention to our mental health. While it's easy to think that the way we think and feel is fixed, and that there's nothing we can do to change it, in fact the opposite is true.

The decisions we make on a day to day basis make a lot of difference to our overall well-being. If you're willing to make some small changes that make a big difference, you could quickly find yourself leading a more motivated, grounded, and ultimately, happy, life.

Some superfoods can help you in your work towards improving your mental health. Ashwagandha is one of our favourites. Whether it's easing insomnia, or helping you fight stress, this is a powerful natural supplement.