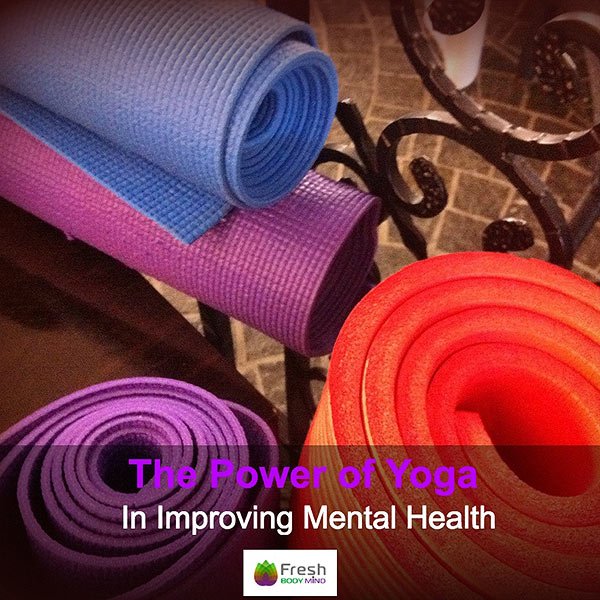 Ever wonder why you feel so re-energized after a yoga session? Sure, the peaceful shavasana might have something to do with it, but it’s not just that. From the beginning of the practice right to the end, yoga’s gentle poses and controlled breathing help to soothe the mind, leaving you destressed, focused and ready to face the day.

How Does Yoga Improve Mental Health?

Combining both physical and spiritual practices, yoga has been used for millennia as a means of achieving bodily and mental wellbeing. The word itself means ‘union’, referring to yoga’s aim of uniting the human with the divine and the body with the mind.

Yogis have endorsed the mental as well as the physical benefits of the practise for decades. For yoga teacher Ashley Turner, “yoga is a psychology — the whole practice helps us work with the nature of the mind, the nature of being a human, how emotions live in our bodies, how they affect our behavior and our minds.”

From fighting depression to overcoming anxiety, recent studies have supported the potential benefits of yoga for our all-round mental health.

Thanks to a whole range of new studies showing the potential benefits of the practice on reducing stress levels, doctors are increasingly recommending yoga as a holistic treatment for anxiety.

Like all exercise, yoga is effective in increasing neurotransmitters in our brain, including GABA (gamma-aminobutyric acid). As one of your main inhibitory neurotransmitters, GABA is essential to the function of brain and central nervous system, helping to promote a state of calm within the body. The best bit? Research has shown that a single one-hour session of yoga can increase GABA levels by 27 percent.

But it’s not the movement that’s great for your mind. The meditational exercises interwoven within yoga are also a powerful stress-buster. By distracting the brain with posture and breathing, meditation is believed to help eradicate anxious thoughts, helping to relax the mind as well as the body.

Like anxiety sufferers, those fighting depression have been shown to have low amounts of GABA in their cerebrospinal fluid. Although most antidepressants target the body’s production of serotonin, research trials are currently underway to develop medicines that specifically boost GABA levels – something that yoga does naturally, according to a number of studies.

So why is yoga such a powerful mood-enhancer? Well, the answer may lie in the way it makes us breathe. In fact, a new type of controlled breathing with origins in yoga has been trialed as an alternative to traditional antidepressants. Sudarshan Kriya yoga (SKY), which uses types of natural breathing patterns to harmonize the body, mind and emotions, was compared against bilateral electroconvulsive therapy and the antidepressant imipramine in a recent study. Of the participants who undertook 30 minutes of SKY breathing six days a week, 67 percent had achieved remission after four weeks of treatment.

Physical exercise has long been known to help improve memory and concentration by stimulating the brain to release a chemical called brain-derived neurotrophic factor (BDNF). This chemical rewires memory circuits so they function better.

As well as triggering the release of BDNF, researchers believe that the enhanced self-awareness that comes with meditation makes yoga more effective than conventional exercise in improving memory and concentration. In one recent study, 30 female participants showed significant improvements in focus levels and ability to take in and retain new information after a single 20 minute yoga session.