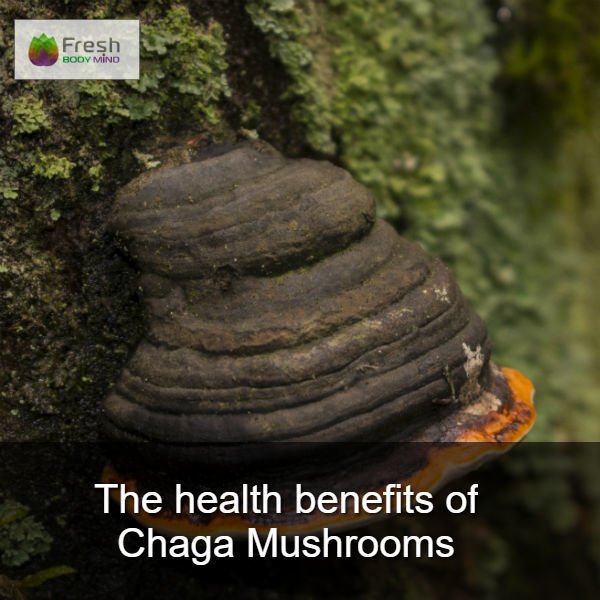 Chaga mushrooms are a type of edible fungus that grows on birch trees, in very cold climates. Consumed for centuries in Northern Europe, Siberia, Russia, Korea, Canada and Alaska, these mushrooms are now enjoyed worldwide, due to their health-giving properties.

Read on to find out everything you need to know about the health benefits of Chaga mushrooms.

What Are Chaga Mushrooms?

Chaga mushrooms are a type of edible fungus, rather than a vegetable. Also known as ‘black mass,’ ‘cinder conk’ and ‘birch canker,’ they have a very distinct appearance, looking similar to a woody lump of burnt charcoal. Typically, between 25-30cm in length, these unusual mushrooms have a soft, orange-colored core when broken opened during preparation for human consumption.

How Can Chaga Mushrooms Benefit My Health?

Chaga mushrooms have been used in traditional Siberian and Asian medicines for centuries, due to their alleged health-boosting properties. These ancient cultures believed that they could help to improve immunity and enhance the body’s overall health.

Traditional medicines also recommend Chaga mushrooms for the management of diabetes, as well as the treatment of heart disease along with some types of cancer. Animal and test-tube studies have suggested that this mushroom extract can reduce long-term inflammation and fight harmful bacteria and viruses, thus boosting the overall performance of the immune system.

Similar studies have also shown that they may prevent the formation of tumors or slow their growth, thanks to its high antioxidant content, which helps to prevent cell damage by free radicals (in particular, this mushroom contains the antioxidant triterpene, which can help kill cancer cells in very concentrated versions.)

It’s also thought that they may help to reduce blood sugar levels and insulin resistance, and they could be useful in managing diabetes, a long-term health condition that affects millions across the globe. These mushrooms may also reduce ‘bad’ cholesterol levels and increase levels of ‘good’ cholesterol in the body as well.

As human research is unavailable, however, it’s not clear whether these claims are 100 percent accurate, though it certainly can’t hurt to incorporate Change mushrooms into a balanced diet.

Do Chaga Mushrooms Have Any Side Effects?

While few reports of ill-effects have been made, it’s worth being aware of the fact that no human studies have been conducted on the overall safety of Chaga mushrooms, or medical guidance so to the correct dosage to consume them for health benefits.

These mushrooms could also interact with some common medications, for instance, the mushrooms may pose a risk to people on insulin or those with diabetes, due to their impact on blood sugar levels in the body.

Chaga mushrooms also contain a protein that can stop blood clotting, posing a potential threat to anyone taking blood-thinning medications, or those who have been diagnosed with a bleeding disorder or anyone who is preparing to have surgery.

As Chaga may help reduce inflammation, the mushrooms may also cause increased activity in the immune system, thus adversely affecting people with auto-immune diseases.

If you are concerned, you should consult your doctor before eating Chaga in any form, such as supplements. Women who are pregnant or breastfeeding should avoid these mushrooms, as there is no hard medical research to prove that they are harmful towards a developing fetus.

How Can I Use Chaga Mushrooms?

Traditionally, these mushrooms were finely grated and brewed as a medicinal tea. Today, they are available as a pre-prepared tea, but they can also be taken as a dietary supplement or bought as a powder before being sprinkled into your favorite drink or smoothie.

You can buy Chaga mushrooms from your local health food store and from some international supermarkets. Online suppliers are available if you struggle to find Chaga mushrooms for sale in your area. Discover more about mushrooms with health benefits including Cordyceps mushrooms, Lion's Mane mushrooms, and Turkey Tail mushrooms and more on our blog.