Turkey Tail mushrooms have been the particular focus of a lot of scientific studies to learn more about their effects on the body’s immune system. There are a few areas of our health where scientists believe these little mushrooms could make a real difference, including the monocytes (an immune cell made in the bone marrow), natural killer cells (a type of white blood cell) and dendritic cells (immune cells located in tissues like the skin).

Read on to learn all about the health benefits of Turkey Tail mushrooms.

What are Turkey Tail Mushrooms? 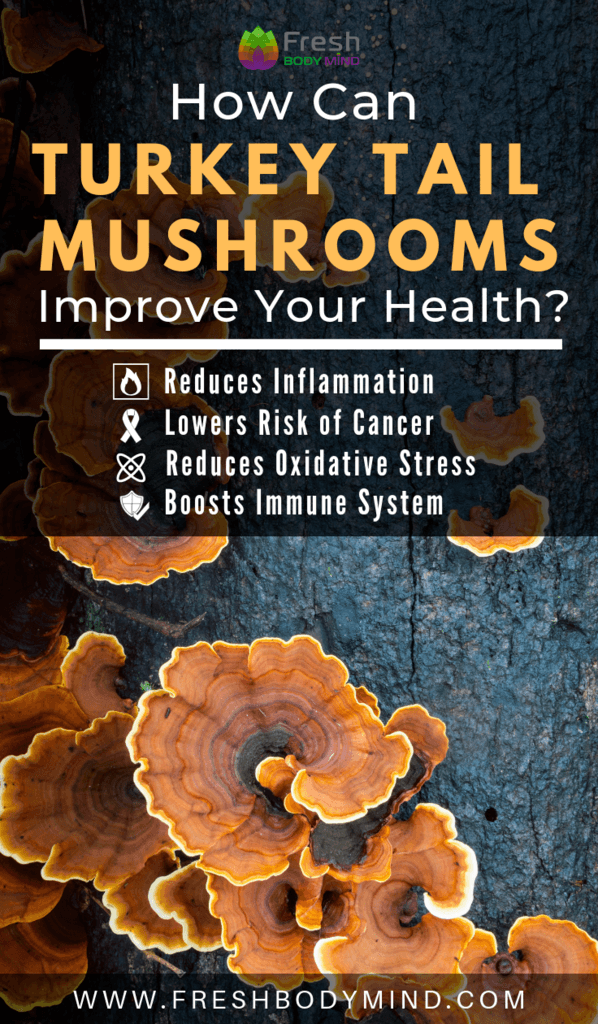 The Turkey Tail mushroom’s scientific name is Trametes veriscolour and it is also known as Coriolus veriscolour. These mushrooms can typically be found growing on dead logs in woods and they are a woody bracket polypore type of fungus. Their name originates from their appearance, which closely resembles the tail feathers of a turkey because the fungus grows in concentric circles and the color varies from dark brown to tan.

What are the Health Benefits of Turkey Tail Mushrooms?

Turkey Tail mushrooms are also packed full with antioxidants which some scientific studies have shown to help reduce the risk of developing heart disease and certain cancers. Antioxidants have been known to help reduce inflammation and reduce oxidative stress in the body through natural compounds such as flavonoids and phenols and Turkey Tail mushrooms have over 35 different phenolic compounds!

The health benefits of PSK have been researched in a scientific study in T-cell dysfunction which is a common side-effect of patients receiving chemotherapy treatment for cancer. The study suggested that PSK could help reverse the T-cell dysfunction which is caused by chemotherapy and it could even help to reduce the adverse effects of it on the body as well as potentially increase the anti-tumor effects of colon cancers.

Another scientific study was carried out on mice with tumors to investigate the anti-tumor effects of Turkey Tail mushrooms. During the study, the mice were treated with 45.5 and 90.0 mg per pound (100 and 200 mg per kg) of the body weight of CVG, a particular type of polysaccharide located inside Turkey Tail mushrooms that helps to prevent the spread and growth of colon cancer cells.

The mice were given the same dose of CVG every day for a period of nine days and at the end of the study, the mice were found to have had their tumor size significantly reduced. The researchers involved in the study showed that CVG helped to enhance the immune response to the cancer cells in the mice.

PSP, on the other hand, has been found in scientific studies to increase monocytes, which are a type of white blood cell that specifically fights infection and can boost the immune system. The PSP found inside Turkey Tail mushrooms can also help to suppress inflammation in the body, which is vital for those suffering from a weakened immune system caused by medical treatments such as chemotherapy.

Medicinal mushrooms, like Turkey Tail, Lion’s Mane and Reishi, have been used in traditional Asian medicine for centuries and their powerful healing properties are only just being discovered in the West, by health food fans and those who favor alternative, natural remedies to treat various illnesses and health conditions.

More research will help to expand on their potential but so far the research points to there being a number of very interesting potential health benefits available from Turkey Tail mushrooms.