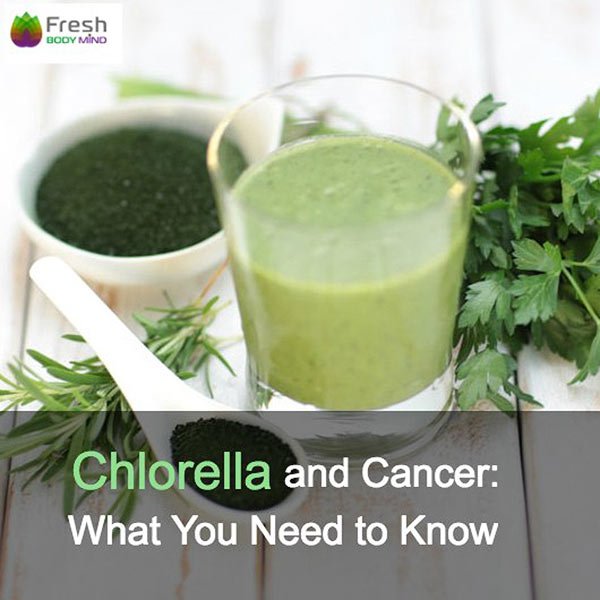 There’s a reason chlorella has earned its reputation as a superfood. Despite its single-celled status, this vivid green algae packs a nutritional punch. Loaded with amino acids, minerals, vitamins, enzymes and polysaccharides, chlorella carries a whole load of health benefits.

From weight loss to immune system support, the list of evidence-backed benefits is long. But what’s getting researchers most excited is the role chlorella may play in the battle against cancer. So without further ado, let’s look at what we know.

When it comes to cancer treatment, chemotherapy or radiotherapy are the main weapons we have in our medical fight. But while they can be effective, both therapies can take a huge toll on the body. That’s where chlorella comes in. Chlorella’s high levels of chlorophyll may well protect against the damaging effects of ultraviolet radiation treatments, while also helping detox the body of radioactive particles.

This could be big news for those suffering from the unpleasant side effects of cancer therapies, including nausea, fatigue and anemia. To further explore chlorella’s ability to detoxify the body during chemo, researchers at Virginia Commonwealth University Medical College carried out a two-year study. The results were promising. They found that glioma-positive patients suffered from fewer respiratory infections and flu-like illnesses when taking chlorella. This suggests that thanks to its nutritional clout, this superfood algae may well help immunocompromised patients resist infection and restore immunity, while also decreasing the terrible side effects of chemotherapy.

On the back of clinical research and positive feedback from patients, chlorella is now being used in the UK to help cancer patients. And according to Nadia Brydon, senior therapist in complementary medicine at Breast Cancer Haven, the superfood is having a massive impact.

Nadia says chlorella is a great way of taking on magnesium, which can be found in green vegetables. "Magnesium is one of nature's antidepressants and helps us cope with stress. One of our best sources is from chlorophyll in green plants – and chlorella is bursting with that," she told The Telegraph. Coupled with its high chlorophyll content, she argues that it is a vital supplement for anyone battling cancer.

The cancer-fighting potential of chlorella is not clear cut. But while more research needs to be carried out, a number of studies have suggested that this superfood could help both prevent and treat certain types of cancer.

So let’s begin with the evidence. Here are the top science-backed claims for chlorella’s role in fighting cancer:

One of the most vocal supporters of chlorella is Professor Randall Marchant of Virginia Commonwealth University. As early as 1986 he carried out a clinical study into the effects of chlorella in the treatment of brain tumors. While the algae did not offer a complete cure, Prof. Merchant said: “It didn’t make brain tumors go away or shrink, so it didn’t cure the cancer, but it did help the patients by boosting their immune system so that they resisted opportunistic infections.”

According to a 2009 animal study, chlorella had a positive effect on killing liver cancer cells. Another study in 2010 supported these results, with scientists finding that a hot water extract of chlorella induced apoptosis in liver cancer cells. While this research was only carried out on rats, it does suggest promising results for human cancers.

So is chlorella a cancer cure? No. But then again, no single compound is. Instead we should view it as a potential powerful ally in the fight against cancer.

There’s no denying that chlorella is a powerful superfood. As one of the most nutrient-dense foods in the world, this tiny algae may be small, but it certainly packs a punch. But can chlorella really help tackle cancer? And is it a useful antidote to the harmful effects of radiation and chemotherapy? While more research needs to be carried out, chlorella certainly shows promise. Clinical trials suggest that this mighty green algae helps detox the body of harmful toxins, while also potentially killing certain cancer cells.

So how should you take a chlorella supplement? It’s up to you! If you’re using chlorella powder, try blitzing it into a smoothie with banana, coconut water and citrus to sweeten it. Or if the powder isn’t for you, simply take three to six organic chlorella tablets every day with plenty of water.  For the Best Chlorella brand click here.