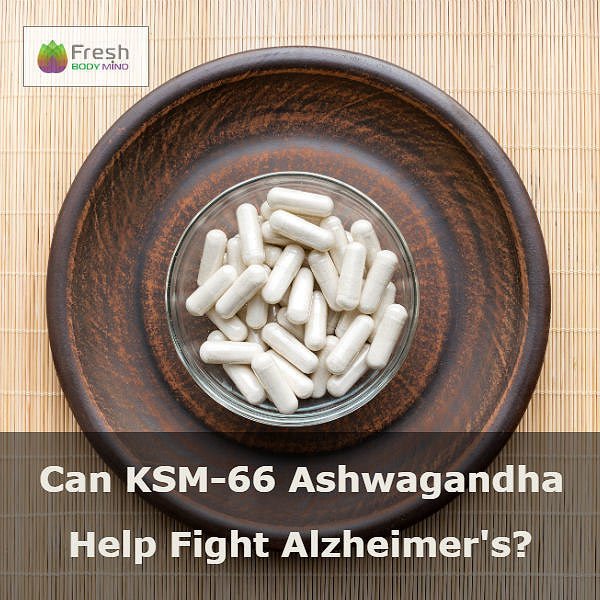 We often talk about how superfoods can boost our physical health, but how can they help keep our brain fit and healthy? With neurodegenerative diseases like Alzheimer’s on the rise, it’s never been more important to consider the ways we can support our brain through diet.

And when it comes to superfoods, they don’t get much more powerful than KSM-66 Ashwagandha. Packed with brain boosting potential, this adaptogenic herb has been shown to support brain health and even help fight Alzheimer’s.

What is Alzheimer’s Disease?

Memory loss is often part and parcel of old age. But Alzheimer’s is more than that – this form of dementia causes serious problems with memory, thinking and behavior. Symptoms may be mild at first, but will usually get worse over time. While there are ways to slow down the progression of Alzheimer’s there is no cure. However, certain superfoods have shown promise in helping to prevent the disease, and even reduce its symptoms.

So what causes Alzheimer’s? To understand how this neurodegenerative disease develops, we have to explore how the brain works. The brain has 100 billion never cells, all of which are connected to form communication networks. Alzheimer's disease prevents part of this network from running smoothly. Backups and breakdowns in one area can trigger problems somewhere else, eventually leading to noticeable symptoms like memory loss or mood swings.

Ashwagandha has been used in Ayurvedic medicine for thousands of years as a treatment for many different health problems. It’s only in recent years, however, that researchers have really begun to appreciate the huge potential of this herb – particularly the extra powerful, full-spectrum version, KSM-66 Ashwagandha.

Recent studies have suggested that KSM-66 Ashwagandha has many benefits for brain health, thanks both to its amazing adaptogenic properties and unique nutritional profile. Here’s how it may help:

One study from Newcastle University concluded that Ashwagandha inhibits the formation of beta-amyloid plaques. When it comes to preventing and treating Alzheimer’s, this is vital. Considered toxic to brain cells, these plaques have been shown to build up in the brains of people suffering from the disease. Therefore, Ashwagandha’s ability to slow down their formation could significantly help to keep the brain fighting fit.

Many studies into Ashwagandha and Alzheimer’s have been completed on animals, however one small double-blind placebo-controlled trial showed positive results for humans. Researchers supplemented men with bipolar with 500mg of KSM-66 Ashwagandha daily. After the trial, the participants showed greater improvement in working memory, reaction time and social cognition compared to those taking a placebo.

Whether or not you’re suffering from Alzheimer’s Ashwagandha has been shown to support significant cognitive improvements, helping with concentration and mood. One particular study compared the results of cognitive tests from healthy men who were supplemented with KSM-66 Ashwagandha against a placebo group. Researchers concluded that in metrics like reaction times and concentration, the supplemented group demonstrated significant improvements. This suggests that Ashwagandha can help keep your brain healthy, potentially protecting it against neurodegenerative diseases like Alzheimer’s.

How Else Can KSM-66 Ashwagandha Support Brain Health?

Ashwagandha’s brain-boosting ability doesn’t end with Alzheimer’s. The superfood has also been shown to help:

With an estimated 5.7 million Americans living with Alzheimer’s, it’s never been more important to start protecting our brain health. And with the help of KSM-66 Ashwagandha, it couldn’t be easier. Boasting benefits like higher energy levels, better sleep, and more balanced hormones, this superfood has plenty of good stuff packed into a powerful package.

Find out more about how KSM-66 Ashwagandha can improve your brain health here.