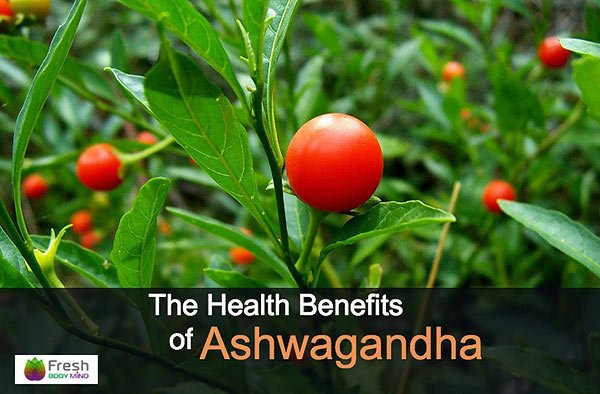 You’d be forgiven for having never heard of Ashwagandha. Used for thousands of years in Ayurvedic healing, it’s only recently started making a name for itself in the western world.

Why? Well its name gives you a hint. Meaning “the strength of the horse” in Sanscrit, Ashwagandha is believed to impart the energy and strength of a stallion. And its effects really are impressive. The subject of hundreds of scientific studies, ashwagandha could help improve thyroid function, boost stamina and even help prevent a number of common diseases.

Also known as ‘Indian ginseng’ as a result of its revitalizing properties, the exotic sounding Ashwagandha actually belongs to the same family as the tomato. Native to the dry regions of India and northern Africa, Ashwagandha is a shrub that bears small red fruit – giving it its other name, ‘winter cherry’.

But it’s the root that locks in the majority of the plants benefits. Known as an adaptogen, this herb is part of a unique class of healing plants that help restore, balance and protect the body. In the case of Ashwaganda, it works by recharging the adrenal glands, giving the body a helping hand in responding to stress and fatigue.

Ever suffer from these health problems?

Well you’re not alone. A huge 77 percent of us regularly experience physical symptoms caused by the stress of modern living – terrible news for our mental and physical health. That’s where Ashwagandha comes in handy. As an adaptogenic herb, it can help alleviate these symptoms and restore a sense of well being.

The health benefits of ashwagandha don’t stop at mental wellbeing. Packed with many useful medicinal chemicals, including amino acids, choline, alkaloids and withanolides, this herb has a whole host of other health benefits.

When your thyroid is out of whack, you certainly know about it. Weight gain or loss, dry skin, mood swings and fatigue are just a few of the symptoms of hypo or hyper thyroid issues. That’s where ashwagandha comes in. Proven to help regulate a sluggish or overactive thyroid, the adaptogenic herb can work with your body to bring your hormone levels back to balance.

In a 2014 study, scientists measured the effect of ashwagandha on thyroid function among people with bipolar disorder. Their results were promising, revealing a slight rise in the T4 hormone among all the patients. So while Ashwagandha may not be a magic cure for thyroid issues, it’s certainly a step in the right direction.

When your adrenal glands are worn out from a tidal wave of emotional, physical and mental stress, it can prompt a condition called adrenal fatigue. This has can have a knock-on effect on other hormones, including progesterone levels. The end result? Tiredness, brain fog, lower immunity and food cravings.

With rates of neurodegenerative disease at record levels in the western world, ensuring good brain health has never been more important. And ashwagandha is a good place to start. Shown to not only reduce stress but protect brain cells, the herb is thought to help sufferers of depression – as well as potentially prevent conditions such as Alzheimer’s.

The Institute of Natural Medicine in Japan has conducted extensive research into the impact of ashwagandha on brain health. Using a model of damaged nerve cells, scientists found that the herb played a part in regenerating the dendrites and the axons of nerve cells. While more research needs to be carried out, the study hints at ashwagandha’s potential for treating diseases such as dementia.

Ashwagandha doesn’t just promote calm and relaxation – it can boost endurance too. Its ability to balance stress hormones and boost concentration is a huge benefit for those looking to improve their stamina, concentration and motivation.

One recent study offers a fascinating insight into the stamina-boosting properties of ashwagandha. Scientists found that lab rats fed ashwagandha were able to swim twice as long as those who were fed a regular diet. And for humans, the herb seems to have a similar effect. Shown to boost cardiorespiratory endurance among athletes, it’s well worth taking as part of an active lifestyle.