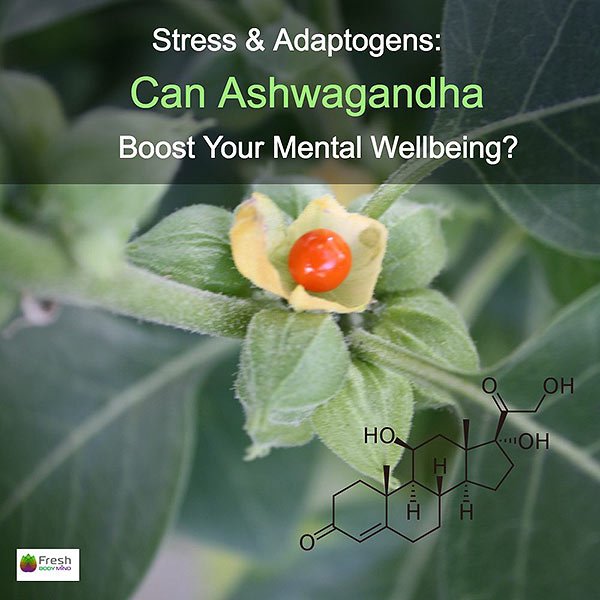 A herb native to India, Ashwagandha has been cherished since ancient times for its restorative qualities. Often referred to as Indian Ginseng, this superfood is commonly used in Ayurvedic healing for aiding both mental and physical ailments.

But how exactly does Ashwagandha work? And why is it good for us? The answer lies in its adaptogenic properties. Effective at combatting stress, anxiety and depression, adaptogens really can help boost mental wellbeing. Here’s how.

Adaptogens are natural healing substances. Working with the body, they are an effective ally in the fight against stress and fatigue. Rather than performing one specific function, they can help harmonise and restore our body’s overall balance. By recharging the adrenal glands the adaptogens provide the body with the tools to better respond to stress – in effect, helping your body to help you.

As well as helping us deal with stress, adaptogens are believed to have other physiological and psychological benefits for the mind and body. These include an improved immune system, increased physical and mental endurance, and reduced discomfort associated with poor health.

There are several herbs considered to be adaptogenic, including astragalus, ginseng, licorice root, holy basil, and rhodiola. But studies have found Ashwagandha to be among the most effective.

The Effects of Too Much Cortisol

The most important way that Ashwagandha and other adaptogenic herbs combat stress is by reducing cortisol levels. Cortisol is a steroid hormone produced in the adrenal glands and transported throughout the body through our blood. Cortisol plays an important role in the body, from regulating metabolism to influencing memory formation. But as always, it’s possible to have too much of a good thing. In fact, when cortisol levels get out of control, they can have adverse effects on our mental wellbeing.

Often causing anxiety, depression and even chronic fatigue syndrome, too much cortisol can leave you feeling mentally drained. These symptoms can in turn have a significant impact on your physical well being, potentially leading to weight gain, diabetes, thyroid conditions, and an increased risk of cancer and heart disease. The most common cause of enhanced cortisol levels? Stress.

How Does Ashwagandha Reduce Cortisol?

One of the adaptogenic herb’s most widely regarded benefits is its potential to reduce cortisol levels. In one large-scale study, a regular intake of Ashwagandha led to a reduction of cortisol levels by up to 26 percent. In turn, participants reported increased energy, reduced fatigue, improved sleep, and an overall sense of mental well-being.

Like other adaptogens, Ashwagandha can help to improve mental wellbeing by controlling the release of stress hormones, such as CRH (corticotropin-releasing hormone). When CRH travels to the pituitary gland, the release of ACTH (adrenocorticotropic hormone) is triggered, which in turn releases cortisol. These hormones alert the body to perceived threats, triggering our ‘fight or flight’ mechanism.

However, if stress hormones are constantly emitted then the body is likely to exhaust itself, causing chronic stress. By controlling the initial dispatch of CRH before it has a chance to trigger the release of cortisol, adaptogens help to combat stress at its source.

What Effects Can Ashwagandha Have on Our Mental Wellbeing?

Now that you know the science behind adaptogenics, take a moment to consider how Ashwagandha could improve your day to day life.

One recent study published in the Indian Journal of Psychological Medicine showed that participants who regularly took Ashwagandha scored better on three different tests, each measuring stress, anxiety, and overall wellbeing. Anxiety levels amongst the participants dropped by 72 percent, whilst responses to general health also improved dramatically. Similarly, the perceived stress scale fell by an average of 44 percent. Ashwagandha not only helped the participants feel less stressed, it also showed signs of increasing their productivity.