Despite their size, kidney stones can cause a lot of pain and discomfort for anyone unfortunate enough to develop them. Made almost entirely out of crystallized minerals that have formed into a concentrated mass, kidney stones form in the urinary tract, due to factors both environmental and genetic.

Although it can be tricky to predict whether you’ll ultimately end up getting them at some point during your life, it’s possible to make changes to your diet, to significantly decrease the chances of kidney stone formation. Adding pomegranate juice to your diet could be part of those changes.

Read on to learn about why you should consider the benefits of pomegranate for kidney stones.

The pain and discomfort caused by kidney stones tend to arise when individual stones grow to a size larger than 0.5mm. The most commonly found mineral that kidney stones are comprised of is calcium oxalate, a form of calcium salt. This mineral is typically colourless, and when enough of it accumulates to form as a kidney stone, it often makes the stones appear rough and ragged in shape.

Kidney stones can sometimes form when people take forms of medication containing doses of calcium, Vitamin D, from dehydration or if they have underlying medical conditions that cause higher levels of calcium to build up in their urine.

Pomegranate juice is ideal for tackling kidney stones, as it is known to be high in antioxidants. The peel, the seeds, the oils and the juice of the fruit from the Punica granatum shrub are steeped in antioxidants such as polyphenols.

These polyphenols include highly nutritious substances such as tannic acid, which has anti-bacterial and anti-inflammatory properties. Polyphenols such as tannic acid help ward off harmful free radicals, which could do damage to the cells in our bodies. They also have the effect of potentially helping prevent the conditions which allow kidney stones to crystallize. 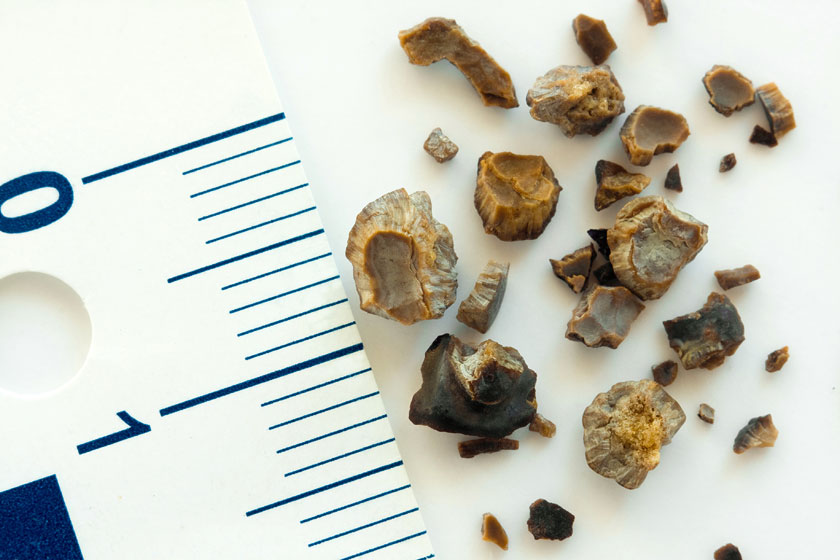 How Pomegranate is Good for Kidney Stones

You’ll be wondering, what can fruit juice do, to stop these minerals crystallizing to form kidney stones? Fortunately, a study was published in the journal Renal Failure in 2009, showing just how it does this.

The study explored the relationship between pomegranate juice and kidney stones, taking a sample group of rats and giving them differing doses of juice, to see if it had any material impact on the formation of stones in their kidneys.

Over the course of 45 days, the rats were regularly examined, on day 7, day 15 and day 45, with scientists examining their kidneys, looking for signs of crystallization. Even within just one week, crystals were found in at least some of the rats, particularly ones that had been given doses of ethylene glycol (EG).

By day 45, crystallization had become mild to severe for the rats given EG, going to show how quickly it can occur. However, the scientists also noticed something incredible - the rats given a middle-to-high dose of juice had little to no observable crystalline formations in their kidneys, even by the 45th day of the study.

Under closer examination, these rats given middle-to-high doses of juice showed lower levels of oxidative stress resulting from oxalate crystals, something you would expect, considering that the juice contains a high level of anti-oxidants. The study even found that pomegranate juice had been found to have inhibitory effects on renal tubular cell injury within the rat kidneys too.

Pomegranate Juice for Kidney Infection - What Are the Benefits?

As mentioned earlier, pomegranate is an exceptional source of tannic acid, which has anti-bacterial and anti-inflammatory properties. As well as kidney stones, there are a number of diseases that can affect the kidneys, which serves effectively as the body’s drainage system, helping remove waste in the form of urine and excess fluids.

The kidneys feed through into the bladder through tube-like ureters, and the bladder holds urine and excess fluid until it can be excreted. However, diseases such as Urinary Tract Infection (UTI) can often take root in this part of the body, stopping the kidneys from carrying out their function. UTI is estimated to affect approximately 11 per cent of the US population.

Fortunately, pomegranate juice is ideal for tackling infections of this nature, as diseases such as UTI often result in symptoms such as tissue inflammation. A paper presented a meeting of the American Society of Nephrology in November 2010 unveiled the findings of an Israeli study, carried out, which involved 101 kidney dialysis patients.

Some of the patients were offered a placebo, while others were offered pomegranate juice. Those who ingested the juice were found to have reduced levels of inflammation, and subsequent laboratory testing conclusively showed these patients had also experienced less tissue damage, as oxidative stress had seemingly been minimized by the presence of anti-oxidants within the juice itself.

As you can see, pomegranate juice has been found not only to help prevent the crystallization of kidney stones - it also actively helps reduce the inflammation of tissues, often associated to certain diseases affecting the kidneys.

It’s up to you to find which brand of the juice you choose to add to your diet.

When it comes to home remedies, and feel the effects as nature intended, it is preferable to find juices of the highest purity, as this eliminates the risk of the product being diluted by other juices, or having higher levels of additives in it, which might negatively impact the nutritional value of the juice itself.