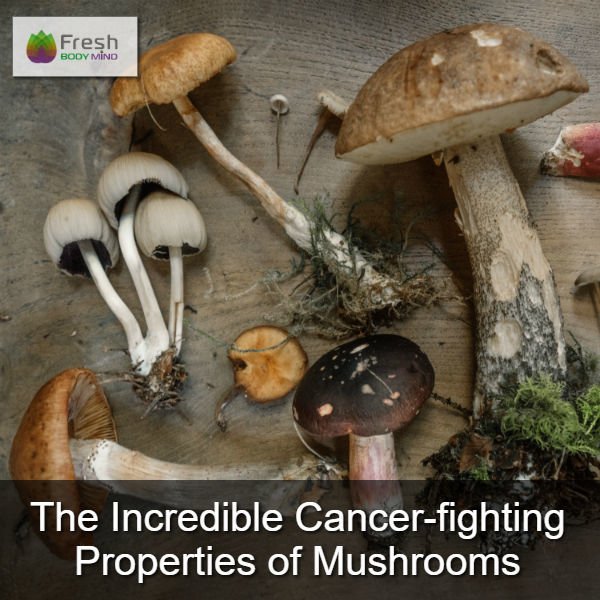 Button and flat mushrooms are the most common varieties consumed in the USA, though there are thousands of species growing in the wild around the globe, including Shiitake, Maitake, Turkey Tail, Chaga, and Reishi, which have been linked to health benefits and are classified as superfood mushrooms.

Modern research has looked at different types of mushrooms, mushroom extracts and compounds to determine whether these have the capacity to prevent or stop the growth of tumors (cancer cells) in the body.

Though results have been both interesting and promising, nothing has yet been proved conclusively, though it’s thought that some of the chemical compounds found in mushrooms might strengthen the immune system. The next step for researchers is to investigate whether this capacity can be used to fight cancer cells.

Mushrooms are approved in Japan and China as a complementary therapy, alongside traditional cancer treatments like chemotherapy and radiotherapy. In fact, Agaricus subrufescens mushrooms are the most popular form of alternative medicine used by cancer patients in Japan, with the shiitake mushroom extract AHCG being the second.

Which Types of Mushroom Have Been Studied?

While a variety of different types of mushroom have been studied for their potential cancer-fighting properties, the following varieties have yielded the most promising results.

Research conducted on animals has shown promising results, with lentinan displaying the ability to arrest the growth of bowel cancer cells. Lentinan has also stopped leukemia cells from dividing in clinical trials, though this has yet to be tested on human subjects.

A study published in 2011 studied the medicinal effects of Brazilian Abanicos Blazei mushrooms on tumors, showing an anti-tumor and anti-infection response, suggesting that the mushroom had promise as an additive treatment for some serious diseases, including cancer.

Clinical studies have shown that this type of mushroom extract may slow the growth of breast cancer cells. The extract has also shown promising cancer-fighting effects on skin, lung, and prostate cancer cells.

In a study published in 2003, scientists linked the use of reishi, a medicinal Chinese mushroom, with cancer cell death, particularly in breast and prostate cancer cells. The study stated that:

“Ganoderma lucidum (Reishi mushroom) clearly demonstrates anticancer activity in experiments with cancer cells and has possible therapeutic potential as a dietary supplement for an alternative therapy for breast and prostate cancer.”

A similar laboratory study in 2016 looked into the effects of Reishi mushrooms for the positive effects on the immune system, tumor response, long-term survival, host immune functions and quality of life in cancer patients.

While the turkey tail mushroom or its properties have not been directly proven to be a cure for cancer, there is evidence to suggest that it is beneficial when used in conjunction with evidence-based conventional treatment. Turkey tail mushrooms may be used in combination with other medicinal mushrooms as part of an integrative plan to restore general health and prevent the possible recurrence of cancer - as well as alleviate some of the symptoms of cancer treatments.

According to certain studies Lion’s mane may have a positive effect in treating cancer. In varying degrees, compounds from lion’s mane mushroom could slow the progression of spreading cancer types when tested on animal.

Different types of Cordyceps extract were reported to provide certain anti-cancer effects. Certain studies in mice for instance have shown that Cordyceps have anti-tumor effects on lymphoma, melanoma and lung cancer. Additionally, Cordyceps may also alleviate the side effects associated with many forms of cancer therapy.

Anti-cancer properties of King Trumpet mushrooms have been highlighted by certain studies as well as other mushroom types. A study investigating the effects of various types of mushrooms on the prevention and protection against the growth of certain cancer cells highlighted promising results, with oyster mushrooms included as one of the most effective types. However, neither the King Trumpet mushroom or any other mushroom type are officially considered a direct cure for cancer.

What Do These Results Tell Us?

So far, the research carried out on certain varieties of mushrooms as a potential cancer treatment has been conducted on animals and in lab conditions, rather than on human subjects in clinical trials.

Laboratory research is often a good indicator of potential, but findings must be viewed with skepticism and used cautiously since substances that can kill cells in laboratory conditions don’t necessarily turn out to be useful when applied to humans.

Mushrooms should be regarded cautiously as cancer curing superfood alternative or substitute to traditional Western medicine’s approach to treating this condition, such as radiotherapy, chemotherapy, and surgery.

Rather, they are a treasure trove of potential for the treatment of numerous health conditions, which should be opened and explored further, including diabetes, weight loss, and heart disease.

Are Mushrooms and Mushroom Extracts Safe?

There are no known side effects from consuming edible, superfood mushrooms, providing you don’t eat them in an excessive amount! Mushrooms should be enjoyed as a part of a balanced diet, rich in vitamins derived from whole foods like fruits, vegetables and legumes and low in processed convenience foods.

Mushroom extracts including Peak Power Mushroom Complex by Fresh Healthcare which contain the Peak 02 Organic Mushroom Blend are classed as dietary supplements and there has been limited research carried out to determine if these interact negatively with any types of medication, foods, medicinal herbs or other supplements.

If you are receiving cancer treatment, you should consult your GP and/or oncologist before taking any supplement or making any drastic changes to your diet.