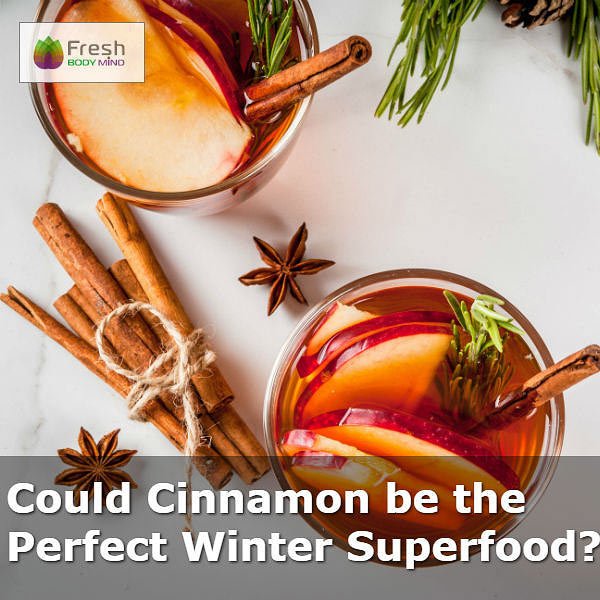 What would winter be without the delicious taste and fragrance of cinnamon? From cookies to hot cocoa, this warming spice flavors all sorts of cosy treats. But it’s not just the taste of cinnamon that makes it the perfect winter spice – it is also the wealth of health benefits it offers. Boasting a whole range of essential vitamins and nutrients, cinnamon really can help give your body a boost during the colder months.

Cinnamon has always been valued for its delicate fragrance, taste and health benefits. In fact, in ancient times this spice was more valuable than gold. Nowadays cinnamon bark might not cost you a fortune, but it’s still prized in the health world for its incredible medicinal properties.

Derived from the brown bark of cinnamon trees, and native to Sri Lanka, cinnamon is available in two varieties: Ceylon and Cassia. While Cassia cinnamon comes mainly from China, Vietnam and Indonesia, Ceylon originates from Sri Lanka, India, Madagascar and Brazil. What’s more, it has a subtler flavor than Cassia, making it perfect for delicate desserts. But it’s not only in taste that the differences lie – Ceylon has also been shown to contain far less of the potentially harmful chemical coumarin, making it a safer and healthier option than its Cassia variant.

Why Cinnamon is the Perfect Winter Superfood

Winter is the perfect time to stock up on superfood cinnamon. Here’s why:

Cinnamon Can Help Stave Off Colds and Flu

Viruses like colds and flu run rife during the winter months, which makes it all the more important to boost your intake of antiviral superfoods. Luckily, cinnamon perfectly fits the bill. As a natural antibiotic, anti-fungal, anti-microbial and antiviral agent, cinnamon can help to naturally ward off all kinds of harmful infections and viruses. For a cold remedy that actually works, try making cinnamon tea out of raw honey, Ceylon cinnamon and a squeeze of lemon.

Cinnamon is Full of Antioxidants

Cinnamon is packed with a number of protective antioxidants, all which work to minimize free radical damage and slow down the aging process. In fact, according to the OTAC scale, this superfood spice ranks number seven thanks to its impressive offering of antioxidants. During the winter months, when our immune systems might be lagging, antioxidants become even more important. The perfect excuse to introduce more delicious cinnamon into your winter diet.

The holidays can be a difficult time for those with diabetes. With so many sweet treats on offer, it’s easy for your blood glucose levels to creep up. Thankfully, cinnamon might be able to help. This superfood spice is thought to have anti-diabetic effects, helping lower blood sugar levels and even improving sensitivity to insulin – a vital hormone for keeping blood sugar levels balanced.

Cinnamon is Easy to Incorporate into Your Winter Diet

In the colder months we crave for warming, soothing foods. Hot drinks like cocoa and tea become even more appealing, as do hearty stews and fiery curries. And luckily, cinnamon is the perfect compliment to any of these. With its signature warming flavor, cinnamon has the potential to elevate all kinds of winter dishes. Simply add a spoonful of Ceylon cinnamon to your normal spice blend to make it even more nutritious and delicious.

Adding cinnamon into your diet during the winter couldn’t be easier thanks to its deliciously warming taste. But before you reach for that dusty jar on your shelf, you might want to consider investing in a new one. After all, nothing can match the nutritional profile of organic Ceylon cinnamon. To find out more about the potential of this spice, take a look at our article on the everyday benefits of cinnamon.