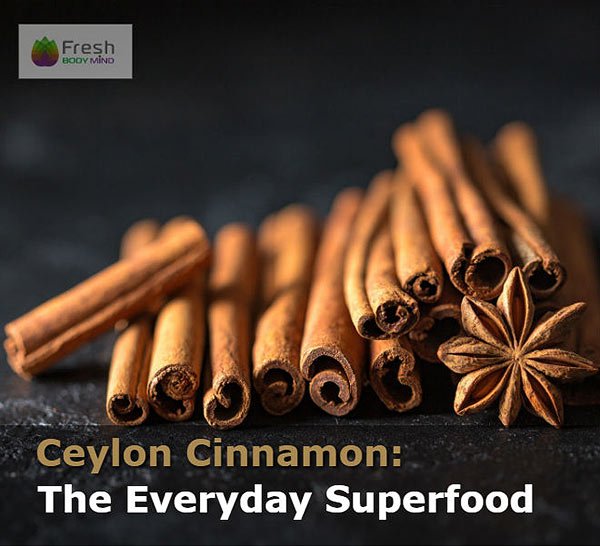 Who doesn’t love cinnamon? This everyday spice is at the heart of so many delicious dishes, especially in the colder months. But Ceylon cinnamon doesn’t just offer a warming, sweet taste. This fragrant bark has also been used medicinally for thousands of years thanks to its impressive antioxidant, anti-inflammatory and anti-fungal properties.

What is Ceylon Cinnamon?

Not all cinnamon is created equal. In fact, there's a good chance that the jar of cinnamon in your cupboard is actually Cassia – a spice made from the bark of East Asian evergreen trees. While Cassia might taste similar to the real thing, it doesn’t offer all the incredible health benefits of Ceylon cinnamon, which comes principally from China, Japan, Indonesia and Vietnam.

The most important distinction between the two spices is their levels of coumarin, a natural compound that acts as a blood thinner. Coumarin has been shown to be toxic to the liver and kidneys, and it may also be carcinogenic, which can negate any health benefits of cinnamon. Additionally, for patients already on blood thinners, coumarin can pose a serious risk. This chemical is present in much higher concentrations in Cassia than in Ceylon cinnamon. In comparison, Ceylon cinnamon contains 1,000 times less coumarin than Cassia, making it a far safer option for everybody.

Not only that, but most of the scientific studies into the health properties of cinnamon are carried out on Ceylon cinnamon. This means that to guarantee the best health benefits, it’s always a good idea to find the real thing.

1. Cinnamon is Loaded with Antioxidants

Antioxidants help reduce free radical damage and slow the aging process. And luckily, cinnamon is packed full of them. In fact, researchers have identified 41 different protective compounds in the superfood, making it one of the most antioxidant-rich foods in the world.

The high number of antioxidants found in Ceylon cinnamon give it impressive anti-inflammatory properties. This means that cinnamon might have the potential to ward off inflammatory diseases like heart disease, Alzheimer's and even cancer. In particular, studies have pointed to the high amount of flavonoid compounds found in cinnamon. Flavonoids are highly effective at reducing inflammation levels throughout the body, helping reduce the pain and swelling associated with all kinds of illnesses.

Cinnamon is recognized for its blood sugar lowering effects. As well as improving insulin resistance, cinnamon has been shown to reduce the amount of glucose that enters the bloodstream after a meal. Additionally, the spice improves glucose uptake by cells through mimicking insulin. Combined, these properties make Ceylon cinnamon an important superfood in regulating blood sugar levels.

Cinnamon is used in many cultures to help prevent and treat infection. The superfood works thanks to its natural anti-biotic, anti-fungal, anti-microbial and anti-viral properties, all of which help fight fungal and bacterial infections in the digestive tract or on the skin.

One study looked at the incredible antibacterial effects of cinnamon by demonstrating its potential as an effective alternative to chemical food preservatives. Researchers who added just a few drops of essential oil of cinnamon to refrigerated carrot broth found the spice prevented the growth of food-borne pathogens for up to 60 days.

According to research led by Dr. P. Zoladz, chewing cinnamon flavored gum or even just smelling the sweet spice may improve brain activity. His study concluded that cinnamon enhances cognitive processing and was found to improve test subjects' scores related to attention, memory and visual-motor speed when working at a computer. Additionally, a 2011 study suggested that cinnamon’s brain-boosting properties might mean it can help prevent various neurodegenerative diseases, including Alzheimer’s.

Cinnamon isn’t just a tasty spice – it’s also packed full of health benefits. From improving brain power to fighting infection, this popular superfood should be a store cupboard staple. Just make sure you invest in organic superfood Ceylon cinnamon for an even bigger health boost.

Ready to get experimenting with some delicious cinnamon recipes? Why not check out our Fire Cider recipe?