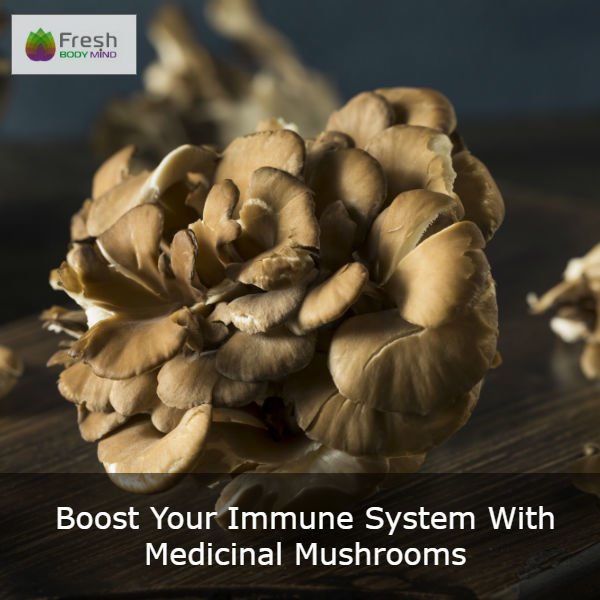 Medicinal mushrooms have been used in Eastern medicine for thousands of years for a wide range of potential health benefits, including boosting cognitive function, helping to regulate hormones and raising energy levels along with increasing endurance and stamina.

All varieties of mushroom are packed with B vitamins, trace minerals, fibre and protein as well as being low in calories, fat and carbohydrates, making them an ideal choice for those who want to stay healthy and manage their weight.

Mushrooms are also an anti-inflammatory food, containing high levels of beta-glucans, compounds that stimulate immune cells. They also contain high levels of an antioxidant called ergothioneine that helps lower inflammation throughout the body.

How Can Medicinal Mushrooms Improve My Immune System?

According to published research, mushrooms can protect us from numerous diseases as they are associated with lowered inflammation, a common cause of illness. They can also help balance PH levels in the body, creating a more alkaline environment where diseases find it difficult to grown.

Mushrooms also have the natural ability to combat bacteria and viruses. In fact, mushrooms have developed robust anti-bacterial and anti-fungal compounds in order to survive in their natural habitat.

Amazingly, some substances found in antibiotics, including penicillin, streptomycin and terramycin, are derived from mushroom fungal extracts.

What Are the Five Best Mushrooms to Boost Immunity?

Many of the thousands of mushrooms that grown in the wild are said to have immune boosting properties. Here, we cover the five mushroom varieties that have been studied in the most depth and detail to discover their amazing benefits to the immune system.

The turkey tail mushroom is one of the most studied medicinal mushrooms as it holds the potential to both fight disease and boost the immune system, preventing infection.

Studies have also shown that beta glucans can help the immune system slow the growth of tumours and protect the body from the effects of cancer-causing compounds.

Tremella mushrooms are powerful immune regulators and have long been used as an immune tonic to help the body fight infection.

Like turkey tails, maitake mushrooms contain beta glucans that support macrophage and killer cell activity. They are also a rich source of antioxidants, vitamins B and C and a range of minerals. Maitake have been highly sought after for centuries for their immune regulating effects.

Shiitake mushrooms could also have potent antimicrobial properties, making them a natural antibiotic. Unlike prescription antibiotics, however, shiitake have the amazing capacity to kill only disease-causing microbes, leaving beneficial bacteria unscathed.

Cordyceps mushrooms are known for their ability to boost energy levels and enhance athletic performance, but cordyceps can also benefit the immune system, modulating and improving your body’s innate ability to fight disease. Cordyceps may specifically help autoimmune issues and decrease the quantity of harmful gut bacteria in the body.

How Can I Include Medicinal Mushrooms in My Diet?

Many medicinal mushrooms can be difficult to get hold of and are not known for being particularly palatable. The most convenient way of including these in your diet is as a powdered extract. Simply add this to your favourite smoothie, drink or meal. Several different extracts can be blended together to achieve maximum benefits.

Some mushrooms like the shiitake can be cooked like normal mushrooms or eaten raw. Add these to soups, stews, pasta and rice dishes, noodles or salads, or roast for a crunchy snack.

However your mushrooms are consumed, choose certified organic varieties. As natures recyclers, mushrooms absorb the matter they’re grown in, whether good or bad. Organic mushrooms are guaranteed to be free from pesticides and herbicides.