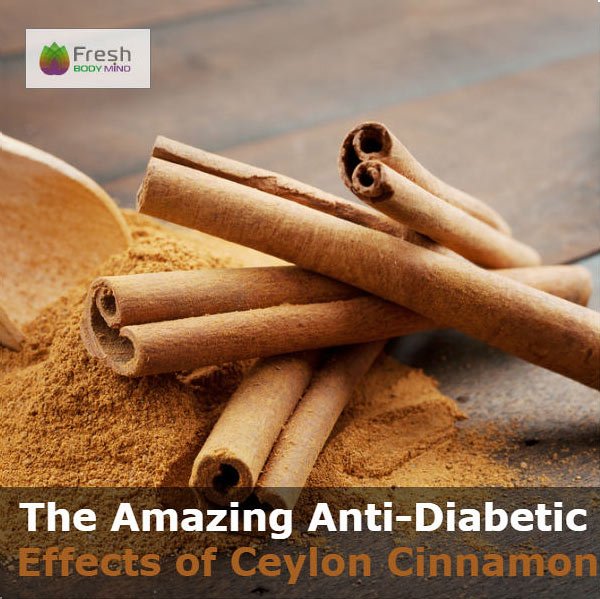 Cinnamon is one of the world’s favorite spices. Sweet, fragrant and warming, its flavor is unmistakable. But did you know that it also offers a wealth of medicinal properties? From heart disease to inflammation, Ceylon Cinnamon could have the potential to help prevent a huge range of illnesses. But perhaps most impressive of all is the spice’s amazing anti-diabetic effects.

Perhaps one of the most exciting benefits of cinnamon is its potential as an anti-diabetic treatment.

Diabetes is a life-long health condition that occurs when blood sugar levels build up to dangerous levels. This is all linked to the ability of your pancreas to produce insulin. When you have diabetes, your body either doesn’t make enough insulin or you don’t respond well enough to the insulin produced. This causes glucose levels in the blood to increase, potentially leading to serious health complications, and symptoms including:

Diabetes presents itself as either Type 1 or Type 2. Although they’re caused by different things, both types require medical treatment as well as a healthy diet. This is where Ceylon Cinnamon comes in. Certain herbs and spices have been shown to help prevent and treat some of the conditions linked to diabetes, including low blood lipids, high blood sugar and high blood pressure. So whether you’re hoping to prevent the disease or looking to help naturally treat it, cinnamon may be an important spice to add to your diet.

The Anti-Diabetic Effects of Ceylon Cinnamon

It’s hard to believe that such a popular spice can help treat such a serious illness, but the anti-diabetic effects of cinnamon have been proven in a number of studies.

Ceylon Cinnamon can help prevent and treat diabetes thanks to its ability to lower blood sugar. Importantly, by interfering with digestive enzymes, cinnamon has been shown to slow the breakdown of carbohydrates in the digestive tract. This can help lower glucose levels after a meal, making it a useful natural supplement for diabetics, even if you don’t regularly indulge in sugary food.

Insulin plays a vital role in our bodies. As one of the key hormones that regulate metabolism and energy use, it is essential for directing blood sugar from the bloodstream into cells. However, those suffering from Type 2 diabetes or metabolic syndrome have insulin resistance, meaning they’re not affected by insulin.

The Health Benefits of Ceylon Cinnamon

Heart disease is the world’s biggest killer, accounting for a combined 15 million deaths in 2015. This means it’s vital that we take care of our heart health through diet – and cinnamon might be able to help. Studies suggest that a 120 milligram dose of Ceylon Cinnamon per day can help improve blood markers and reduce LDL cholesterol, while animal studies show that it can have a positive effect on blood pressure.

Inflammation is the root of many common diseases and infections, which is why it’s so important to keep it under control. Enter Ceylon Cinnamon. This spice is known to down-regulate inflammatory cytokines and boost the production of anti-inflammatory proteins. Packed with antioxidants, cinnamon can also fight the free-radicals that can worsen chronic inflammation.

Antioxidants do a seriously important job. Not only do they help regulate free radicals, but they can ease oxidative stress. And luckily cinnamon is full of them, meaning the spice can help your body protect itself against metabolic and environmental toxins.

It’s not just diabetics who should consider incorporating cinnamon into their diet. Anyone who wants to help regulate the blood sugar levels should be stocking up on this spice. Just remember that not all cinnamon is created equal. For the guaranteed best results, it’s always best to stick to organic Ceylon Cinnamon. Its subtle taste makes it an ideal flavoring for all kinds of sweet or savory dishes, so get experimenting!

Or if you're looking to get even more out of your superfoods, try this article for some advice on the most powerful superfood combinations.