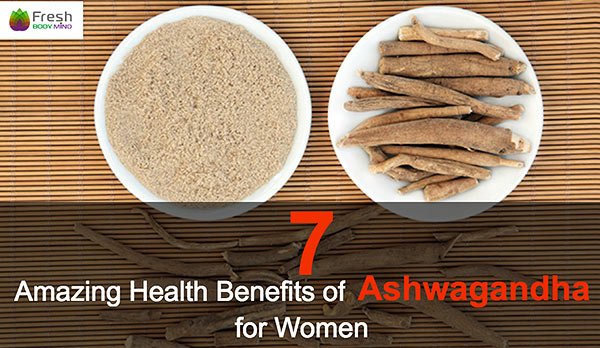 Ashwagandha translates from Sanskrit as ‘the smell of a horse’, not the most beautiful of names, but it conjures up something incredibly powerful: the qualities of strength and vigor that Ashwagandha can impart on the user. Quite apt really, considering Ashwagandha offers a whole wealth of incredible health properties – especially for women.

For many women, hot flushes, insomnia and mood swings are some of the less than pleasant, but unfortunately quite common symptoms of the menopause. But research has suggested that Ashwagandha could be an effective natural medication for those suffering from symptoms associated with the hormone imbalance caused by the menopause.

By working with the adrenal glands and deploying antioxidants, Ashwagandha has been shown to help reduce fatigue, stress and hot flashes, whilst increasing energy levels.

In one study 51 menopausal women were given Ashwagandha as a supplement, with many noting the positive effects the herb had on reducing their symptoms. By targeting the endocrine system, Ashwagandha was able to encourage hormone balance, therefore easing anxiety and hot flashes.

2. Turn Back the Clock

There’s a reason why presidents can count more than a few gray hairs after a term in office. Stress is a proven contributor to the effects of aging, with symptoms including wrinkles, muscle loss, and general weakness.

A series of studies have shown Ashwagandha to improve our body’s resistance to daily stress, as well as decreasing the fat-building hormone cortisol.

On top of reducing the visible toll of aging on our bodies, Ashwagandha is also recognized for its restorative benefits, with users feeling more energized

As well as promoting graceful aging, Ashwagandha is also used in India to treat memory loss associated with aging. Research on animal models has shown that the herb can reduce memory deficiency, including amnesia, while also building up the brain’s resistance to oxidative stress – an imbalance in the production of free radicals and antioxidant defenses that has the potential to lead to neurodegeneration.

Even mild anxiety has the potential to make the sufferer’s day to day lives difficult, with effects ranging from digestive problems to fatigue. For those who want to try a natural remedy, Ashwagandha has been used for millennia to help tackle anxiety, with no proven side effects. Recent research has supported this historical evidence. A 2012 study involving 64 participants noted a significant reduction in anxiety after two months of use. Other studies have also shown the benefits of Ashwagandha for women suffering with adrenal hyperplasia (enlarged adrenal glands).

Ashwagandha has been used since ancient times as an aphrodisiac. For women, an Ashwagandha supplement has the potential to increase libido. Key to the herb’s effectiveness here are its rejuvenating properties, which have been shown to work for both men and women.

As well as improving libido, Ashwagandha has been used as a natural fertility treatment for those trying to conceive. By tackling the common problems associated with female reproductive health, including stress, hormone imbalance, and nutrient deficiencies, Ashwagandha can potentially help to optimize fertility.

Although research into the benefits of Ashwagandha as a treatment for infertility is not conclusive, studies have indicated that the herb supports thyroid function, one of the organs responsible for hormone regulation. Coupled with its benefits in reducing stress – a key threat to reproductive health – Ashwagandha can help achieve the biological conditions required for conceiving.

Diabetes is a growing problem in modern society, but Ashwagandha may hold the key to helping with treatment. The herb has been shown in several human studies to reduce blood sugar levels.

The studies are still on a small scale, but early results are positive. One team of researchers found that in a small group of people with Type 2 diabetes a supplement of Ashwagandha taken for 30 days helped lower fasting blood sugar levels. In fact, the results showed a decrease in blood glucose that was comparable to the impact of an oral diabetes medication.

While more research is required, it looks as though Ashwagandha’s effect on insulin secretion and sensitivity could be harnessed to help reduce blood sugar levels.

If you enjoyed reading this article then take a look at The Health Benefits of Ashwagandha to gain an even deeper insight into this amazing super food.
Sign Up Today for FREE Healthy Lifestyle Hacks, FREE Recipes & Exclusive Discounts on Superfoods & Health Supplements!